Our news editor Zoë Hill dug through Flyer News archives from 2001, shortly after the attacks on Sept. 11, to compare students’ reaction to the War in Afghanistan over the years.

The final fleet of soldiers was withdrawn from Afghanistan Monday after a 20-year U.S. military presence in the Middle East, marking the end of America’s longest war.

The U.S. entered the War in Afghanistan following the attacks on the World Trade Centers in New York City and the Pentagon in Washinton D.C. on Sept. 11, 2001. Then-President George W. Bush famously made the contentious call to give life to the War on Terror, starting with Operation Enduring Freedom. On Oct. 7, the U.S. journeyed into a war to dismantle al-Quada and bring Osama bin Laden to justice.

Two decades later, Presidnet Joe Biden pulled the country out of the war.

Biden’s withdrawl resulted in fatalities of both American servicemembers and Afghani civilians. A bombing at the Kabul Airport left 13 U.S. soldiers dead and 169 natives, according to reporting from the AP. The last 20 years saw the death of nearly 2,500 American soldiers and almost a quarter of a million Afganis are estimated to have died as a result of the military occupation.

“I was not going to extend this forever war,” Biden said in a national address Tuesday. “And I was not extending a forever exit”

“We succeeded in what we set out to do in Afghanistan over a decade ago. Then we stayed for another decade. It was time to end this war,” he added.

The War in Afghanistan is older than the class of 2025 for the most part; recent high school graduates now enrolled at UD were born after the 9/11 terror attacts, making the Afghanistan conflict a war of a lifetime.

Lucinda Judd, a sophmore communication major from New York, recalled the moment she found out about the death of bin Laden. She was 9 years old. Her mom sat her down and explained the events of Sept. 11 and how the U.S. had succeed in its mission. Judd remembers being confused as to why the war was not ending after that day in 2011.

“The war has lasted longer than I’ve been alive and it makes me think of those my age on the other side of the war, who have never experienced a non-active war environment,” Judd said. “I would not call the war a mistake, because I recognize the courage and sacrifice of our military, but it was time to come home for a while now.”

A few weeks into the fall semester of 2001, Flyer News printed a special report on the terror attacks. Several subsequent editions of Flyer News’ volume 49 included reactions from UD students living through the 9/11 attacks and the afterbirth of the War on Terror. 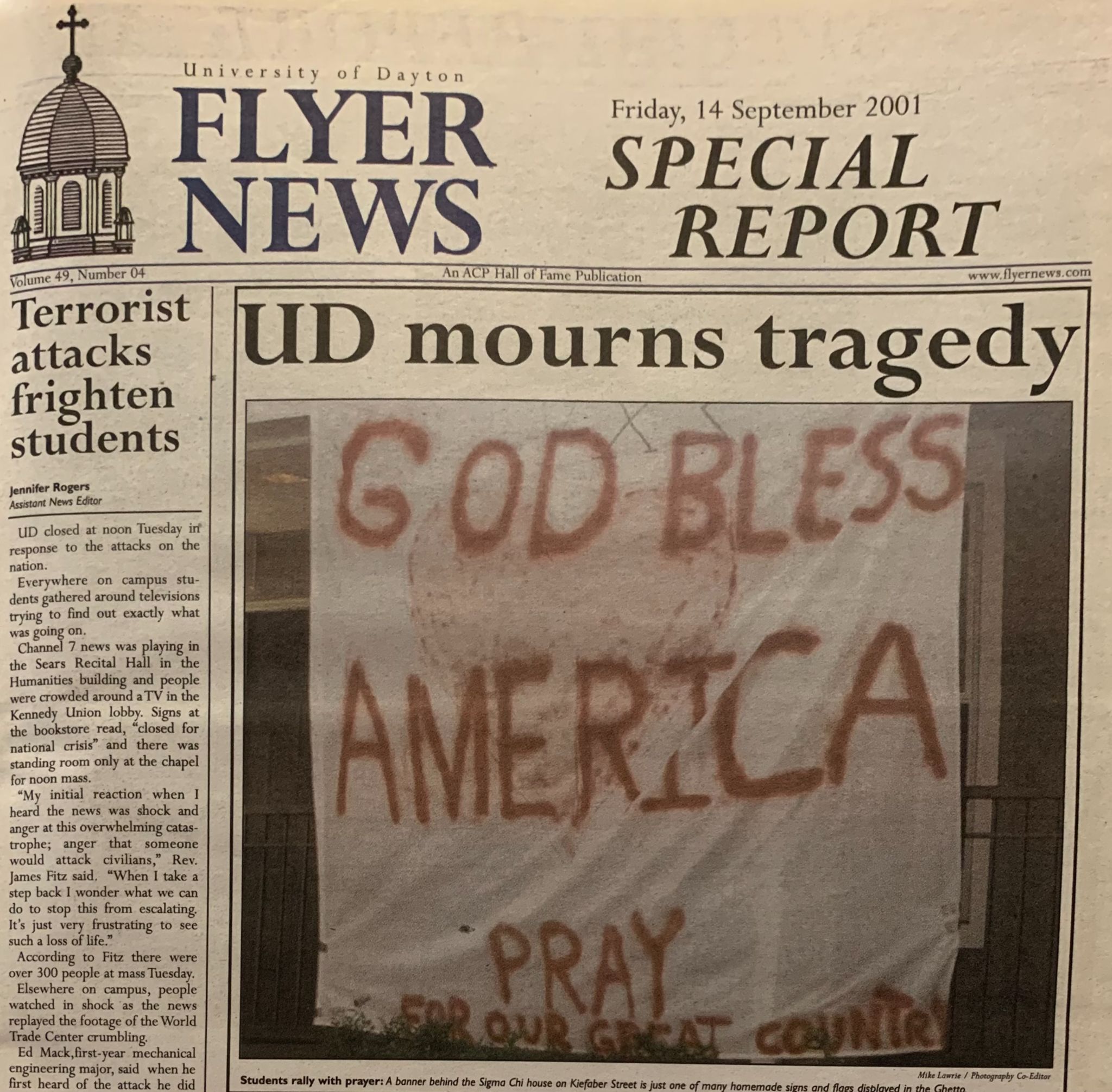 Cover of the special report three days after the attacks on Sept. 11, 2001.

The following student reactions were taken from archived September and October 2001 issues of Flyer News. One article from the time states the general campus conscious was anti-war. The views expressed in these excerpts do not necessarily reflect the current views of the quoted students:

“I do not consider myself a pacifist or a militarist,” Shahyan Ahmad wrote. “I believe that the appropriate action varies from case to case. Perhaps bombing Afghanistan is justified. But killing innocent Afghans is not.”

“Military retaliation would only be a continuation of this policy: the sacrificing of innocents for our own selfish interests,” Geoff Pipoly wrote. “I firmly believe that America is the best country on the face of the planet, which is very reason I so vehemently oppose retaliation. We are bigger than that.”

“Shortly after the sack occurred, one part of me wanted to find the nearest military recruiter so I could sign up and risk my life for this nation,” Renee Mitchel wrote. “Another part of me wanted to donate every penny of my meager savings to help the victims of the tragedy.”

“It is unfortunate, but sometimes you have to fight to be peaceful, and our freedom to be peaceful has been jeopardized,” Michael Garcia wrote. “We responded by showing why we are the most generous, caring and respected nation in the world.”