Welcome Stadium will not be welcoming any fans or teams in 2020, but college football will go on in six of the ten FBS conferences. Photo courtesy of Flyer News.

Although the University of Dayton and other Ohio universities may not be playing college football this fall, plenty of teams are still competing for the sport’s biggest prize.

The competitiveness may be fractured without the Big Ten and Pac-12, but the ACC, Big 12 and SEC, along with a couple of teams from the American Athletic Conference, will still compete for a spot in the College Football Playoff.

With the Power 5 (three?) kicking off Thursday night with Miami (FL) taking on UAB (Miami won 31-14), let’s get into some predictions for how the season will unfold, starting with Miami’s conference, the ACC. The addition of Notre Dame certainly throws a wrench into the expected dominance of quarterback Trevor Lawrence and Clemson, but I think the Nov. 7 match-up will go to Clemson, who will go undefeated on the way to a conference title, which will be a repeat of Nov. 7 as the top two teams face off in an altered format for the ACC. North Carolina has garnered a lot of attention around the college football world because of head coach Mack Brown and quarterback Sam Howell, but inexperience among the players will hold UNC back from competing for a conference title. Virginia Tech also returns 19 of 22 starters, and Louisville is on the upswing after winning just two games in 2018 (up to eight last year).

With the ACC predictions in place, how do I think the Big 12 will unfold? Similar to Clemson in the ACC, Oklahoma seems to be the obvious choice here. With 17 starters returning on a team that went 12-2 last year and likely two less conferences to compete with (Big Ten, Pac-12), it’s CFP-or-bust once again in Norman. Freshman QB Spencer Rattler is a bit of a wild-card, but I think he’ll settle in fine, and Missouri State is a good opponent to help him ease in against on Sept. 12. After the Sooners, running back Chuba Hubbard and Oklahoma State are who I have facing the Sooners in the Big 12 championship game (also top two teams), with the Sooners coming out on top to finish 11-0. A team on the rise is Iowa State, who I have going 8-2 with QB Brock Purdy (3,982 passing yards, 27 TDs and 9 INTs in 2019) leading the way. Baylor, on the other hand, I have taking the biggest step back, as they lose their head coach (Matt Rhule to the NFL’s Carolina Panthers) and nine starters on defense, falling from 11-3 to 5-5. Texas will stay even, going 7-3, not quite having enough to get past Oklahoma, Oklahoma State or Iowa State.

Now that the first of the two “Power 3” conferences are laid out, let’s take a look at the projections for the SEC. Last year’s national champions, LSU, were a one-hit wonder and will go 8-2 at best in 2020 (I have them at 7-3). With that out of the way, on to who I have winning the conference: Alabama. Unless you have LSU somehow recovering from losing Heisman-winning quarterback and No. 1 overall draft pick Joe Burrow, most of their starters on both sides of the ball, and both coordinators, Alabama is the obvious choice out of the SEC West. However, the East division will likely come down to Jacksonville in the match-up between the Florida Gators and Georgia Bulldogs. I think both lose a game outside this match-up (Florida to Texas A&M and Georgia to Alabama in what should be a thriller on Oct. 17), but I think the Gators reign supreme, taking advantage of an offense that is often shaky (see 20-17 loss to SOUTH CAROLINA last year) and returns just two starters. Alabama head coach Nick Saban has too much experience and talent at hand for Florida, but Dan Mullen has them moving in the right direction in Gainesville. Outside of these four teams (Alabama, Florida, Georgia and LSU), a team to keep an eye on is Texas A&M, who I have going 8-2. Head coach Jimbo Fisher has the championship-winning experience (Florida State in 2013), and a team that returns 16 starters from an eight-win team is always worthy of consideration. Tennessee seems overhyped to me (project a 5-5 record for the Volunteers), and Bo Nix and Auburn don’t have quite enough to compete for a conference championship.

Now that the conference are laid out, onto the predictions for the College Football Playoff teams. Yes, I have UCF getting into the playoff over 2-loss teams Florida and Notre Dame. With both of Notre Dame’s losses coming against the No. 1 overall team, I don’t see the committee giving them another chance against the same team. If Florida goes undefeated before losing to Alabama, then they get in with one loss. However, UCF returns a lot of production from a team that lost three games by seven points, so a return to being undefeated is not unlikely for a team ranked in the top 10 nationally last year in scoring offense, passing offense, and total yardage per game, along with a defense that is good enough to carry them to wins over Cincinnati, Memphis and their only Power 5 opponent, lowly Georgia Tech.

However, that will not be enough to get past Trevor Lawrence, Trevor Etienne and the rest of the Clemson offense, as UCF blows their chance to finally prove themselves in the playoff.

The order doesn’t really matter here, as Alabama’ schedule is slightly tougher, giving them the No. 2 spot. Both teams will be putting out inexperienced quarterbacks in 2020, with Mac Jones at Alabama showing inconsistency in his time filling in for Tua Tagovailoa last year, and Spencer Rattler has yet to take a snap for Oklahoma. Head coach Lincoln Riley may return more talent at Oklahoma, but Nick Saban has led Alabama to become college football’s best revenge team. The last time Alabama missed out on a  National Championship Game (2014) they went on to win two of three (2015-17). 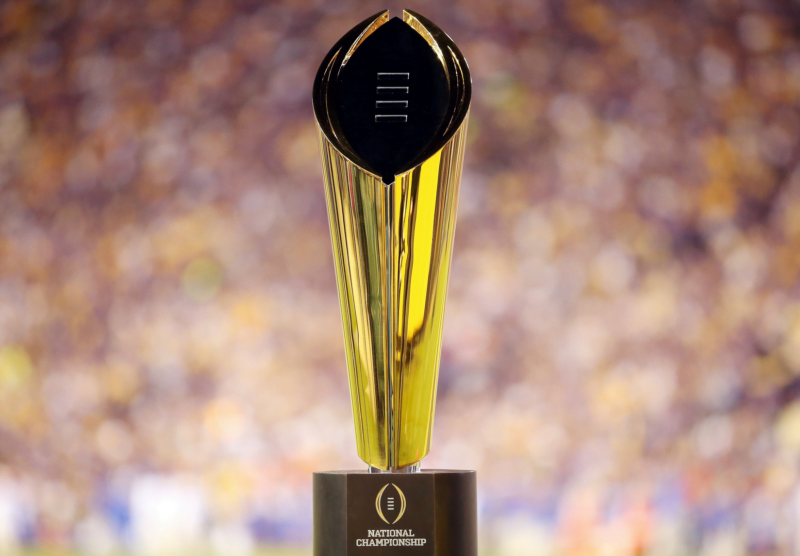 Stop me if you’ve seen this before. If Ohio State had been playing this season, I would have them facing either one of these teams (probably Clemson). Alas, the Buckeyes will not be taking the field, allowing for Dabo Swinney and Nick Saban to battle it out for the fifth time. So far, the winner has been Alabama-Clemson-Alabama-Clemson, which prompts me to go with Alabama to continue the pattern.

Both teams are hungry for revenge, as Clemson lost last year’s championship game (to LSU) and Alabama retains some players from the 2018 team that lost 44-16 to Clemson in that championship game. At the end of the day, both coaches will have their teams prepared to deal with a season fractured by the COVID-19 pandemic, and I think Clemson puts even more pressure on Nick Saban.

This season will certainly be a challenging one for all teams involved, and the resilience that coaches harp on so much will be tested in a truly unprecedented season.